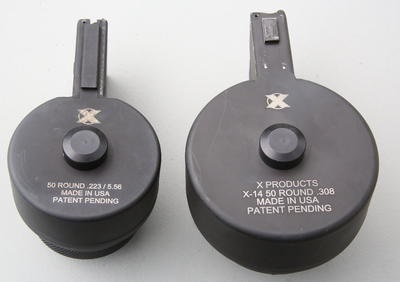 If you have already attempted to buy “high capacity” magazines at a gun show, you already know that all magazines are not created alike. If you haven’t, let us save you the trouble. If you don’t see big, reputable, American companies selling magazines other than standard capacity, for example, 7 rounds in a 1911, 30 rounds in an AR-15, or 20 rounds in an M1A, FAL or AR-10, STAY AWAY. Standard capacity mags are standard capacity for a reason. It is difficult to get more bullets of that caliber to reliably function in a magazine meant for that weapon. It isn’t like anyone ever said, “eh, I think 30 rounds is enough for an AR-15. It was simply the closest round number to get the mags to work as expected, and in the case of the AR-15, even those mags didn’t originally work so good.
X-14 X-15 50 round mags from X-Products are available for the AR-15, M1A, FAL, HK91/CETME, SR25 and the AR-10. They are made in the USA and available at notable national firearms retailers.
In the aftermarket high capacity magazine market there are very few companies that have gotten it right, and that are sold by mainstream firearm retailers next to the guns themselves. X-Products, according to the website was “Formed by four gun loving Hillbilly’s with college educations.” They make a 50 round drum magazine in the USA for not only the AR-15, but also nearly every major battle rifle in the Western world. For the AR-15 you may say big deal. The 60 round Surefire mag is Made in USA, as is the original double drum 100 round Beta C-Mag, but the X-Products mag is an entirely different animal, and if you happen to own an M1A, FAL, HK91/CETME, or an Armalite AR-10, or other .308 AR-15, you have probably never used an actual working magazine that held more than 20 rounds. We were able to test both the AR-15 and M1A versions of the X-Products mags and they work great. There is nothing like them in the market. At $239-$280, the X-Products mags aren’t cheap, but as a one time investment, you couldn’t ask for a better mag to take into battle.
X-15 Shown here on a Colt 6920 with a SlideFire bump stock, the AR-15 version of the magazine sticks down about the same as a Beta C-Mag, but is much lighter loaded.
We tested the M1A mag on the bullpup Juggernaut Rogue chassis.X-14 bolt One quirk is that the bolt had to be open to seat the magazine on the M1A.
The AR-15 mag we tested is very different from both the M1A mag, as well as the Beta C-Mag. There is no loading tool like a Beta C. You turn that knurled disk and drop the rounds in. It is a little tiring, because you can only do a few at a time, then you have to re-position your hand, but who would ever thing that loading a 50 round mag wouldn’t be time consuming? Functionally the X-Products AR-15 mag worked perfectly, but the big question is of course, is it as good or better than the SureFire 60 rounder? My answer is no. In fact, it isn’t better than the C-Mag either. What it is, is different. The X-Products mag will not interfere with a bipod like the SureFire mag will. The SureFire mag is slightly longer than a standard AR-15 mag. The 100 round C-Mag also doesn’t interfere with a bipod, but it is almost 5 pounds loaded, compared to the X-Products 50 rounder which is 3 pounds loaded. So between the three mags for the AR, there is an honest tradeoff, and the winner is your preference.
drum comparison The AR-15 magazine is 3 lbs loaded. Compare that to the 100 round Beta C-Mag at 4 lbs 11oz loaded, and the 60 round SureFire mag at 2 lbs loaded. The 50 round .308 M1A mag is over 5 lbs loaded.
Not so with all of the 7.62/.308 guns. X-Products wins, because there are few if any viable competitors that are so good that a company like Brownells will carry them. The most important thing that our tests showed was that the big and clunky .308 mags are definitely more finicky than the AR version, and you have to develop a system to load and shoot them. Fortunately X-Products puts finger grooves in the winder wheel for loading the .308 mags. It makes it so you can use your thumb as a brake, and with a little bit of finger bending, 50 rounds does indeed go into the magazine. But don’t try to put more than 3 rounds in at a time, because the guide system seems to only be in the top of the magazine. If you backwind it too much, rounds get get stuck in it and you end up trying to hold this big heavy piece of metal upside down while clutching the spring loaded wheel hoping the loaded round will fall out. It’s…awkward, and I personally did it three times.
Loading Loading the .308 magazine is harder even though the spring is the same as the .223, but easier because it has finger grabs instead of a rough surface.
As you can see from the video and the pictures, we used our M1A that has been converted to a bullpup configuration with the Juggernaut Rogue chassis. Coincidentally X-Products actually sells the Rogue, and it is probably because it works well with their mag. You have to lock the bolt open to get the mag in. That is an annoying quirk, and there is no last round hold open on the X-Products mags at all, which would also be a peeve of mine. But honestly, what do you want when there is no other 50 round mag for the M1A that is reliable, period, and this one is a reputable US company with all of their products made in the USA.

At over 5 pounds loaded, the .308 mag is a formidable chunk of weight to add to a rifle, but if you are carrying a .308 battle rifle you probably aren’t dainty to begin with. That will help with both loading and carrying the magazine. We didn’t try the other .308 mags, but there is no reason to assume them to be any different than the M1A mag. There is a quote from Heckler & Koch on the website that they haven’t used a better mag for their rifle. Note by the way that the CETME is listed here because it is the progenetor to the HK91/G3, but we didn’t check with the company to make sure the mag does also indeed fit a CETME. I would also not assume that the FAL mags fit both inch and metric guns. I won’t get into the difference here, but you should ask if you plan to buy one. And in case you don’t know this, the standard Armalite AR-10 is not compatible with P-Mags or the SR-25 version from X-Products. There are Armalite AR-10s that take P-Mags now, but you should make sure you order the right mag for your gun.